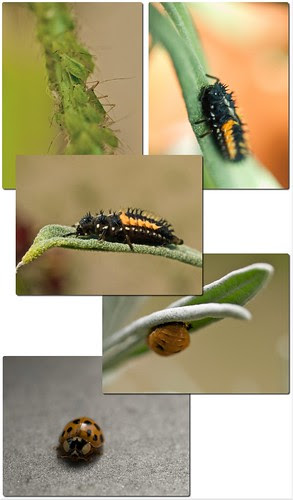 It starts with the Aphids. When we put our plants on the balcony this year those dastardly greenfly hit them with a vengance.

We tried a natural remedy, based on soaked nettles.. but without success we were left with no other option but to pray for ladybird or hover fly lavae. Just when we thought we would never get any luck we spotted the first ladybird lavae. They’re ugly little critters but with plenty of aphids to munch on they soon grew big and strong.

One day they were looking very sleepy and hanging out on the leaves of a lavendar bush. The next morning they had turned into little pupae stuck to the undersides of the leaves. Just over a day later the world had some brand new ladybirds, ready to build a new generation of aphid munching predators. Hooray ladybirds!